The OCMRC is a volunteer component within the County of Orange Health Care Agency’s Health Disaster Management Division and serves a population of over 3 million people within 34 cities. The purpose and main objective of the OCMRC program is to strengthen our communities by helping medical and public health volunteers offer their expertise throughout the year as well as during times of community need.

HISTORY OF THE MRC

In the wake of September 11, America was forced to confront the fact that, while we had thousands of individuals who generously volunteered their efforts to help save lives, the infrastructure was nonexistent.

In some instances, it caused more harm than good; the volunteers were unable to provide effective aid due to the lack of organization and credentialing, causing additional  burden to the officials.

At the beginning of 2002, President Bush addressed the nation, urging all citizens to support their country by offering their volunteer services to their community. In response, the National Medical Reserve Corps (MRC) was established in July of 2002 under the Surgeon General’s Office.

This national organization would serve as the underlying support for the localized community efforts, offering information and strategies, as well as technical assistance. Nearly all of the states now have a MRC program and thousands of individuals have signed up or expressed interest in volunteering. 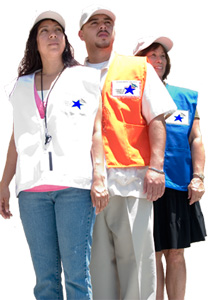 Identify, credential, train, and prepare members in advance for emergencies. Although MRC units are principally focused on their local communities, it is clear that in a statewide or national disaster, MRC volunteers could be vital to the success of the response efforts.  The MRC volunteers supplement existing emergency and public health resources.

MRC units represent key national initiatives of the U.S. Department of Health and Human Services to improve the nation’s ability to prepare for and respond to public health and medical emergencies.

There are approximately 785 registered MRC units nationally. This translates to about 170,000 MRC volunteers. The national Medical Reserve Corps functions as a home base for the MRC units by offering online trainings, best practices advice, annual leadership conferences, and more.

They also coordinate efforts between the local, state, regional, and national organizations and agencies that would help communities achieve their local visions for public health and emergency preparedness.