This report provides a summary of the leading causes of substance-related overdoses in Orange County. Compiled in collaboration with the Orange County Sheriff-Coroner Division, the report found that the overall rate of drug/alcohol overdose deaths in the County increased by 82% since 2000. 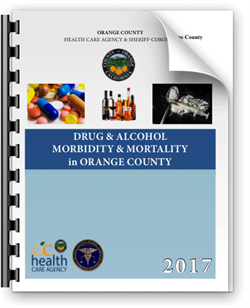 While Orange County has lower drug and alcohol mortality rates compared to the nation and state, notable differences and risk factors were identified for some of our residents. For example, males were nearly two times more likely than females to be hospitalized for and/or die from a drug/alcohol-related incident. Additionally, cities along the coastal and southern regions of Orange County tended to have higher rates of drug/alcohol-related hospitalizations and death than other cities.

Other key findings include:

The study, done in collaboration with the Orange County Sheriff-Coroner Division, found that the overall rate of drug/alcohol overdose deaths in the County increased by 51% between 2000 and 2012.
Some other key findings of the report include: